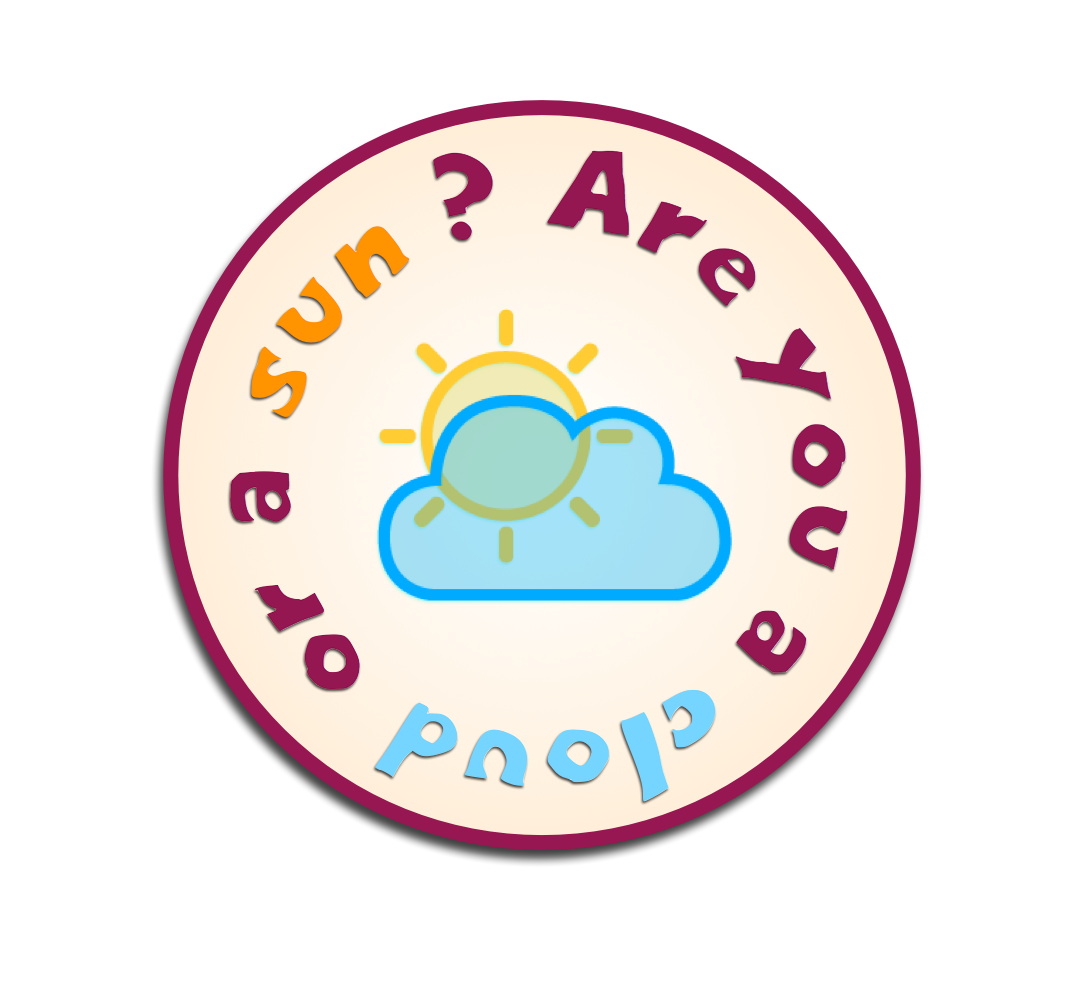 There's a couple that I know. The guy, Alex, is an extreme sun, his wife, Fiona is an extreme moon. (I will explain these two terms in a moment).

Alex and Fiona (not their real names) used to get into hectic fights with each other because their sun-ness and their moon-ness would frequently clash.

And all that changed after their hearing and deciding to commit to one simple but fundamental idea that I want to share with you in this blog post. (They have told me that this one fundamental idea literally turned the quality of their marital harmony around for the better and in fact it has also dramatically improved so many of their other relationships – family, friends and work).

So, let me explain what a moon is and what a sun is so we can understand Alex and Fiona's area of conflict and so we can see the principle that turned things around…

Let’s begin with Alex who is a 'sun'.

Well, as we know, the sun rises each morning, moves westwards across the sky, and then, at the end of each day, it sinks below the horizon. It does the same thing every single day. It never surprises us by rising from the opposite side of the world or by getting up late or by just hanging out in exactly the same place for longer than it should.

A 'sun' represents people who are, on the whole:

A few famous examples of those possessing this

There are some jobs which are predominately done by people with a sun nature, such as: Personal Assistants to CEO’s (who have to be very organised) – Doctors – Civil Engineers – Airline pilots – Sergeants in the army (these are very responsible jobs and more suited to suns)

So, do you think you are a sun?

Is there anyone that you know who is a sun?

So 'moons' are not like suns. Well sometimes they can be like suns. That is when they are waxing – feeling motivated to do something. Feeling energetic and passionate and going full steam ahead with their new plan. But, then the motivation starts to wane for one reason or another and their motivation slows down or veers off in a completely different direction. Basically, moons are less consistent and to a certain degree have no real routine or predictability.

A 'moon' represents the people who are generally:

So, do you think you are a moon? (Bare in mind that some moons can achieve a lot if their friends / school / work place / family provide a consistent external structure for them!)

Is there anyone that you know who is a moon?

So, getting back to Alex, the extreme sun and Fiona, the extreme moon. Can you guess how their opposite natures clashed?

Here are a few examples:

I could go on, but I think you get the point.

Nu?!… So what was the epiphany that neutralised and dissolved these bad feelings which often resulted in fights?

So…… Alex and Fiona attended a series of classes that I gave on explaining personality types. I used a system called the Myers Briggs personality type system that helped each couple understand and articulate their and their spouse’s specific temperament and characteristics and to understand the different challenges that their various similarities or differences could present in their relationship.

“Yes. It seems that way.” I responded.

“You mean that is how she is wired? … You mean it would be almost impossible for Fiona to be organised and disciplined and all those other things that we talked about when we talked about suns?"

"Well, change is possible." I said, "But to proactively change a part of our personality one needs to employ a specific strategy – which we will hopefully learn about in session 4 and 5 – but even then, only tiny, microscopic changes can be made in the short term and it may be years before these changes will be what you consider 'significant'.

"So basically what you’re saying is that I have been totally unrealistic to expect Fiona to have my dinner ready every day when I get home from work… I mean, if I was in her place I would of course have planned out and done the week’s shopping on Sunday and made sure that I would put time aside each afternoon to prepare a nice dinner for my husband who works so hard… But from what I'm understanding, Fiona is unable to do that!"

"Well…" I replied "She is unable to do that 'consistently' at this point in her life. She is not you. She doesn't possess the sun characteristics that you possess."

"You mean it is 'unrealistic' for me to expect Fiona to consistently have my supper ready when I get back from work?" Alex asked as he mentally chewed on this point.

"Yes!" I replied, speaking it out for him again. "Just as it is unrealistic to expect the real moon in the sky to start acting like a real sun, it would be unrealistic for you to expect Fiona to consistently have your supper ready for you when you get back from work… I'm not saying it would be impossible at some point for Fiona to learn to be more sun, but that is not something that can happen overnight. A person can only proactively grow in a specific area by employing a specific strategy and even then that person will only be able to make tiny, tiny changes that will only be able to be seen after a time… and for Fiona it's going to be doubly hard as she finds it hard to do anything consistently."

I could sense Alex's mind was spinning into hyper drive as he processed this idea.

"So…" Alex began one more time as he articulated his growing clarity of this idea "I get angry because Fiona doesn't do what I want her to do and what I think she should do… All this time I've been 'expecting' Fiona to put things back in their place and to have my dinner ready and to be more organised in general because that's what I would have done if I were in her position… But Fiona isn't wired the way I'm wired. She’s a cloud and a cloud cannot suddenly become a sun… it could take years of diligent work. I cannot 'expect' her to act like me just like I wouldn’t ‘expect’ a moon to behave like a sun…"

"You know what…" Alex continued, "In truth, I think that's part of what attracted me to Fiona in the first place, her fun loving nature, her spontaneity, the light and joyful atmosphere that she brings with her… And I think that’s the energy that I need to balance myself out! WOW!!! I don't think our marriage will never be the same!…"

“What do you mean ‘your marriage won’t be the same’?” I asked.

“Well…” Alex explained, “I now understand that Fiona is wired in such a way that she has other strengths that compliment mine and I can’t expect her to have my strengths as well… or at least to develop them over night… It simply isn’t natural for her to behave like me. Right now she couldn’t if she tried! And maybe that’s a good thing… to balance out our relationship I mean.”

"Yup, you've got it!” I exclaimed again at the realisation that Alex was experiencing. “But you know… the clarity that you have right now will fade unless you keep reminding yourself… For example, the next time you find that the tin opener hasn’t been put back in it's place, or that there's nothing for dinner… You are going to have to remind yourself that it is unrealistic to expect Fiona to change over night. Impossible in fact… And that she has other qualities that she is bringing into the marriage."

Fiona finally spoke up at this point in the conversation. "And I guess it is unrealistic for me to expect Alex to be more chilled about the state of the house… over night. The truth is, one of the things that drew me to Alex was his drive and his ability to work hard and be structured. And I need some of that in my life!" Fiona smiled a warm smile at her husband.

It was a magical moment. It was the moment they realised:

This realisation, this clarity, is the idea which I wanted to share with you – and I truly believe that this simple yet fundamental understanding can change the dynamics of so many relationships.

With this realisation there is no anger… In it’s place comes acceptance.

The more we can understand other people's differences – the way they are 'wired' – and 'accept' those differences, the less we will have unrealistic expectations and the less we will get frustrated or angry (just like we don't get frustrated or angry at a moon acting as it does or at the sun acting as it does). I am not saying that we should not believe in the other person – that they can grow – rather I am saying that growth is a slow process. It is unrealistic to expect changes over night, even if our spouse, or whoever it is, is employing a smart strategy to work on themselves.

Most importantly, if our spouse, or whoever it is, does decide to work on a certain area that is causing conflict in the relationship, it is much easier for them to work on that when there are no unrealistic expectations being thrust upon them, but rather, when they find that they are in a supportive relationship – one of love, acceptance and patience.

Also, please consider sharing this blog post with one person who you think would enjoy it. There are sharing buttons right under this message.

2 thoughts on “Are you a SUN or a MOON? – Banishing Frustration From Your Relationships!”